At 06h00, on Friday the 24th of November, Alisha added a line-entry to the thesis I’ve called (privately) ‘My daily toil’. [By then I’d completed the ironing, vacuumed the house – seen to Sebastian’s lunch; developed a plausible theory to bend time & therefore solve the mysteries which vexed my predecessor on the Enterprise; mowed the lawn; and fed the menagerie].

I was instructed asked whether I thought it ‘a good idea’ to participate in Birdlife SA’s Big Birding Day 2017 [#BBD2017], a self-drive / carbon-generating campaign scheduled to start at midnight later that evening ie: the 25th. Now, betw. us please, I’m generally suspicious of a Secretariat with a CEO [‘Secretary General‘ the STD ‘head-honcho’ moniker] BUT Alisha moves in mysterious ways, so I did what I was told.

For those of you who don’t know, #BBD2017, unchanged in structure from #BBD00, is a grand concept & an ancient undertaking in magnitude. Participants push honesty to the limits ie: ‘suspicious,yes – proof, no‘ & identify as many bird species as they can get away with within a 24-hour period ie: from midnight to midnight AND within a 50km – radius. I said ‘radius’ – ie: a circle measuring 100km from one end to t’other. Some teams cover a square with an internal, Merlyn-like radius – an interesting paradox; unless of course I was absent the day they did the ‘Circle-in-a-square = the area of a square‘  hypothesis – an edifying, pigeon-hole irrelevance – who likes maths anyway? The other rules include no kicking, biting or withholding your list to the last minute – a moot point & a valid-defence for the discontent on this side of knife-in-the-back. 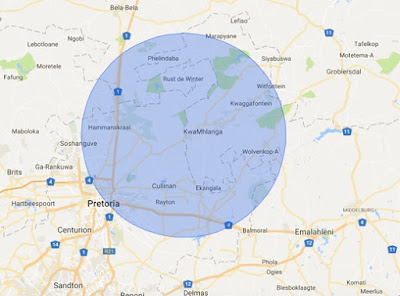 ‘Plan a route‘ – which I did, somewhere between flossing & mopping the floor. BTW – you; yes, you lassie, should do housework & cook a meal – at least once a week. Wash your own car too & whilst I’m on my public-service-soapbox, use public transport once in a while. Nothing like 1st– hand experience when dealing with tardy staff…

Meanwhile, Alisha registered our team @BirdlifeSA & on Birdlasser – the logging-app-thingy that keeps da score. We called our 2½-people team [the 2 of us + Sebastian] ‘Mark & Alisha‘ – a slow-coil flash of brilliance if ever there was – a true contribution to the arts & a pillar in the advancement of our species as a whole.

By 9pm our possible / probable list waved a tired ‘goodnight’. Three hours on the clock passed in about 180 minutes, I think. At the hour of the pumpkin the clock said UP!! – we said something like ‘I’ll be buggered‘ & enjoyed an early loll-in. Nobody likes a fanatic…

At 1am we were UP!!, showered & stepping out sharply. On a late Sandton Friday- early Saturday-ish morning, the Pendulous-titted Streetwalker, a shape-shifting night-owl, skulks in the scrub & sides; nasty, bitey things. Fortunately our circle of influence lay further afield, North & North East of Pretoria – no ‘funnies’ here! Our first tick showed under the eaves of a toll-plaza – Speckled Pigeon. Not exactly a luminary or a bird-o’-the-night but No.1 on our way to a few more.

Our strategy was simple – a tour de farce around the edge of the circumference, in a clockwise meander – with an occasional, tactical dart in-field for 1 or 2 fixtures. [Proprietary information – don’t ask].

1st-up: Zaagkuildrift [near Pienaarsriver] – hallowed ground in these parts; for some nocturnals. No. 2 on the list was far more satisfying – African Grass-Owl; stonking close-ups of a singleton coursing over open grassland. Others followed including Marsh, Barn & Southern White-faced Owl. Spotted Eagle-Owl eluded us – as it did for the rest of the challenge setting in motion a chain of events no less unpopular than a pig in curlers. The edge of our circle’s circumference limited us to 6 or 7 kilometres on Zaagkuildrift only – fair play given the number of owls / nightjars per square-radius in the area. The MCPA Dam, some 1.8km westward of the turnoff off the R101, played the game too. By 3am we’d notched up 15 species including Fiery-necked Nightjar & Bronze-winged Courser. 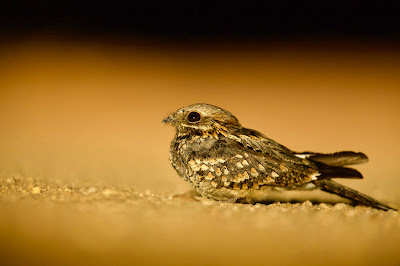 Two or three other teams were on the same route plying their trade. Even fewer stopped to exchange a red-eye pleasantry. A competition then…

Spot-lights scythed through the stygian night; electronic hoots & howls an echo on the ethic’s-code.

We travelled inland; – in-field to Rust de Winter, a derelict hamlet, mostly, but also home to the Toyota / stick-in-the-mud Club, equally lauded in the local birding community as a big-tree banker for African Scops & Verreaux’s Eagle-Owl. Both species came quietly & featured at numbers 22 & 23 on our list. One of our favourite loops in all of South Africa starts here – heads east and swings back towards Pienaarsriver. There are few, if any, better spots in the early dawn for a broad range of bushveld specials. We sat back, inhaled the sweet air & lived the sunrise. Alisha dished out the veggie-crisps [Life is hardly worth living…] No. 100 was in the bag at 6:30 am – African Hawk-Eagle.

Time was called and we headed North-east to another iconic site – Mkhombo Dam [near the village of Libangeni in Mpumalanga – our 4th province for the morning.] Mkhombo, unseasonably dry, paid-off in spades – the effort & the threat of punctures long-ignored as we scoped pandora for more. ‘More’ included Collared Pratincole, Temminck’s Courser, Lesser Masked Weaver [in Libangeni village], Chestnut-backed Sparrow-Lark and Western Osprey. The wader-count was equally impressive & undeniably a mega is just around the corner…

At 09h30 Western Great Egret ticked the 150-up – a high-5 shared amongst 3. At the time ‘Mark & Alisha’ featured in the day’s Top 3; a slug-out for the olive wreath between ourselves, Mpumalanga’s Malelane & Limpopo’s Polokwane. We dallied over a sip of breakfast [Yes indeed]. Overhead the weather promised the prediction of rain – a merry-go-sorry rumbling & like the shivviness of tight underpants – that hollow feeling…

10am had us boiling eastwards & a degree or two south to our fourth – Mabusa Nature Reserve. En route, in the rural sprawl of the Maphotla, Great Sparrow! Lava flowed in our veins & we roared at the gods; buzzing the SS Skosana NR on the fly-by. Skosana is a great spot for one or two specials but, on this day, unnecessary dilly-dally; dally – a waste of time & dilly – sat in the seat alongside.

Mabusa, under-rated really, served up a smorgasbord of highlight-wannabes – incl. Grey Penduline Tit, Green-capped Eremomela, Shelley’s Francolin, Red-faced Cisticola & Striped Pipit. Bird parties had the B’Lasser hanging a jaw – we cocked a snook… Green-capped Eremomela scored 200 for the day at a minute or two before 11:15am. The day was hotting up and, like the clergy, we’d become a little frisky under the collar.

The fifth leg to Verena is my national bestie. This short gravel transect of Mabusa’s southern limits, is the key to immortality – an avian pudding; a sugar-spoon short of heaven. Red-winged Francolin, Short-tailed Pipit & White-bellied Korhaan [Barrow’s] are merely three of so many more. Cuckoo Finch, Sand Martin and Melodious Lark are no less illustrious. Usually Denham’s Bustard & Blue Crane are fixtures but we clapped eyes on neither. Meanwhile, however, over cold chicken, eggs & a green salad, spits of rain scored the Mkhombo dust, an earthy scent & a remnant of better times; the run-off forging runnels on the vehicle’s dirty-matt grey. Indoors, looking outwards, we steamed-up quickly – the hunch-weather’s precipitation not altogether limited to the skies above; some drops more salty from the copious weeping within. We were up the creek with no plan & the tubes beckoned us down…

This short gravel transect of Mabusa’s southern limits, is the key to immortality..

Ahead, 4 more legs of a journey we’d never do justice; Wilge River Valley, Ezemvelo NR, Vlaklaagte & the Seringveld. Dinokeng & De Tweedespruit, originally on emergency-call only, proved a figment of our imagination. I must admit & it’s difficult to make the admission, we had no back-up plan. As it was, we soldiered on [as did everyone else btw.] first to Wilge & eventually to the Seringveld, via De Tweedspruit, well-past sunset. Even so, by 1pm we’d run our race. Our 250th call was still many hours away – Ezemvelo, Vlaklaagte & the Seringveld rain-abandoned.

The 272nd cover was a Fawn-coloured Lark, an obtuse nod to indecency in the dead-o-night, just before 8pm – & our last call before a self-imposed halt to proceedings. It’s not so much the way it ended but how we maimed the beast & therein lies the rub. We’d dishonoured the area [unforgivable i.m.o]; a proud locale boasting some of Southern Africa’s premier birding spots. 330 sp. is, quite frankly, on the cards & yes, I concede the power of Polokwane & even the surprise this year a click or two south of Kruger, but 300+ here, is merely a spat above ordinary – no better than competent.

… 300+ here, is merely a spat above ordinary – no better than competent. 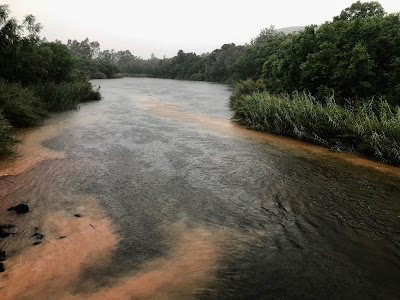 If you’re not lamenting our misfortune & feeling just a touch lumpy, what’s wrong with you! We felt inconsolably ‘sorry for us‘ from about 12pm – 4:30pm.

We travelled from east to west, through the Wilge River Valley, when the rain was cascading down in sheets. Seemingly the geography mourned in sympathy. The river ran in rivulets of blood. Cry me a bloody river… & we did; nary a bird in sight nor even in situ.

AND then we turned left when common sense said straight-home…

From calamity the spring of joy..

From calamity the spring of joy – a woohoo in the driving rain; a reminder that ‘out there‘ is a privilege, not a right. One day this will be 20 years ago. It’s the essence of why we bird. On a scrappy track left, shrouded in ghostly vapour, a wonderland – the ultimate jumping jets. If you know your Disney imagine, if you will, small jets of water taking synchronised flight – a brief sparkle – then gone. From nearby, unanticipated, another leap – a brief sparkle – then gone. Two cross in mid-air; then three… more – sparkle – gone. Now do the same – with Black-rumped Buttonquail! Describing the scene is beyond my capabilities but I will say this – ‘Dance, dance wherever you may be… ‘ and so we did & so we will, next year, when we return – to the same geography, for another crack & this time – 300+ : ‘conditions’ be damned!

For those of you who want to know:

Easter in the N. Cape